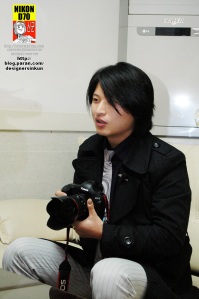 I don’t know how I missed this 2 years ago, but I feel that it’s important that I blog about this even if it’s a bit old news. Because believe me, nothing has changed at Canon Inc. as far as their attitude is concerned. This story broke during the time of the great 1D Mark III debacle that I often still have nightmares about. In the past I have blogged here about what an absolutely horrifying period of my career that was, and believe it or not, I’m still visiting a shrink once a week to talk about it. The story is about a Korean photographer who bought the 1D Mark III only to find out that it had autofocus issues. Rob Galbraith has written about these issues at length, and I’m not going to discuss them here again and open old wounds from my past. The shrink told me I should look ahead now and try to forget about that phase of my life. But I do want to discuss the contents of the article, it’s in Korean, but I’ve been sent the translation and it’s a scary and at the same time heart breaking story. The photographer writes:

I’ve purchased an overpriced lemon and am totally wasted physically, emotionally, and financially. It’s such a stress!

So I feel somewhat satisfied that they would post my story as streaming news on their web site even though this is a small local media. Furthermore, this company uses Nikon so I feel a lot more comfortable about this because I may have doubt whether they would be fair on this story if they’re using Canon themselves.

They had an interview with me yesterday and today they’ll go shoot Canon Korea, which had threatened me (even though not in a direct way). Would they admit the truth or not? Please stay tuned. The news will up on their web site in a few days.

[Canon released a model with defects even after the beta testers raised many issues.]

And then the problems indeed did arise, they are pretending they don’t know anything about it and they’re just trying to earn time. This is a very outrageous business mindset. The CEO of Japan Canon headquarter and the CEO of Canon Korea should acknowledge their wrongdoings and apologize to the consumers sincerely.

I am giving up my copyrights. As long as you won’t modify my faces, you can use any of the pictures on this site. Medias welcome! Journalists, please please use the pictures as much as you want!

Now think about this for a moment. Read the above again, and think about what that means.

This Korean photographer was obviously devastated, having spent his hard earned money on what Canon Inc. pretended was a top of the line fully working product, only to find out that it had issues. Imagine his frustration when he found out what he had invested in. The guy drove around in Korea with banners on his car trashing the camera, for fuck’s sake, he must have been frustrated to no end. Now, let’s be fair here, nobody is perfect and we can all make mistakes, even, and perhaps especially, large corporations such as Canon Inc. We can all understand in the end, even though it may be painful, that mistakes can (and likely will) be made. But what is hard to forgive, is when you make a mistake and then just refuse to admit that, FUCKING LIE ABOUT IT, and refuse to take responsibility and correct the mistake and clean up your mess. That’s when everyone’s blood starts to boil and that’s when you don’t have to expect any kind of understanding whatsoever from anyone.

The text on those banners translates to: “Camera that is a piece of trash – Canon EOS 1D Mark 3”

And that, my friends, is when the shit hits the fan for Canon employees such as myself. I can’t tell you how stressful things can get for me. I like to be honest and people know I’ll always try to help where I can, but things get fucking difficult when Canon Inc. forces you to lie. And since I don’t lie, all I can do is just keep my fucking mouth shut. Because trust me, those bastards in Japan can be real assholes. Don’t get fooled with all the fucking corporate philosophy of Kyosei bullshit and all that goddamn crap. When they have the chance to fuck you over, they’re going to fuck you over. And people are being fucked over everywhere around the world by Canon Inc. right now as I type this.

You don’t have to take my word for it, just look at what that Korean photographer said about Canon Korea threatening him. Remember how Canon Inc. tried to make me take down my own blog 2 years ago by sending their army of lawyers after me? Remember how we had to take down Vincent Laforet’s, eternal peace and blessings be upon him, video “Nocturne” last year? Those Japanese are bullies, and when I once said that Canon Inc. had their gigantic corporate cock up our collective asses here at Canon USA, I wasn’t kidding. Canon Korea probably couldn’t act fast enough to threaten that poor Korean photographer. You have to admire his courage to do what he did. Similarly, Galbraith must have had a fucking huge pair of balls to openly challenge Canon during the 1D Mark III fiasco of 2007/2008. I’m sure he probably needs a wheelbarrow to carry his balls around.

But seriously, these are all despicable corporate practices. Canon Inc. would have been perfectly happy to continue selling the defective 1D Mark III to everyone without ever fixing anything (and we know they never really could fix anything) if Galbraith didn’t stand up and make a big deal out of it. They knew about the issues but still went ahead with the release. And the thing is, this is not an incident. It’s fucking policy, for Christ’s sake, it’s business as usual! The same thing can be said about the EOS 5D mirror getting detached, an issue which they admitted only after the 5D Mark II was released. The same thing can also be said about the EF 50mm f/1.2L lens, of which they have yet to respond to complaints we’ve received from everywhere around the world. Well let me let you in on a little secret, the “solution” Canon Inc. is currently working on, is correcting the problem with this lens in a second version that’ll be on the market soon, while trying to buy time and continuing to sell the old version with issues like there’s nothing wrong. No, your defective lens will not be replaced or fixed, you will just have to suffer with it now and give Canon Inc. more of your money in a few months to get the new version. It’s the same strategy they used with the 5D mirror issue. Once the 5D Mark II was available, suddenly they sent a note to everyone notifying them about the problem with the mirror falling off. They knew that most people would just upgrade to the 5D Mark II, and that after 3 years, not many people would send in their camera’s for repairs, thus saving costs. It’s the same strategy they wanted to use for the 1D Mark III and that Galbraith fucked up for them to a certain degree.

If they’re not using scare tactics, then they just spend as much cash as is needed to buy good publicity. The next time you read a review of a Canon product on one of those popular sites and magazines that are loaded with Canon ads, think about if you want to trust their opinion. The next time you catch a reviewer trying to bend reality, ignoring obvious advantages/disadvantages, or spending way too much words in his conclusion trying to make a Canon camera seem similar to a competing  camera, think about what I’ve written here.

And not to go all John Harrington on you here, but if there is such a thing as karma, I think Canon Inc.’s balance has got to be on the negative side. All of you fucking Canon executives, and I’m not only talking about those of you here at Canon USA, but worldwide, if you know about this, you’re working to keep this system of exploitation and deceit going. You all have a goddamn conscience! Grow some fucking balls and do the right thing for once! Stand up against those fuckers! You cannot pretend like it’s not your fault, and keep “just doing your job” while lying to customers and essentially stealing from people all over the world causing them a great deal of inconvenience. If you continue like this, you are just as guilty as Canon Inc., and karma will catch up to you.

I hope you think about this.