Vincent Laforet, Peace be with Him, and me.

Man you won’t believe how relieved all of us at Canon USA were when Vincent Laforet, God bless his soul, said on Twitter that he wasn’t planning to switch to Nikon at all:

@fcwestfall Oh FakeChuck… always causing trouble… made me laugh though. No – no Nikon / Sony et al in my future…happy Canon guy still

A strange coincidence is also that today marks the one year anniversary of the Canon USA announcement to switch to Nikon. In the end we couldn’t actually switch to Nikon though, because upper management lacked the balls to go ahead and implement the plans. All it took for them to cancel everything was one phone call from Canon Inc. in Tokyo. 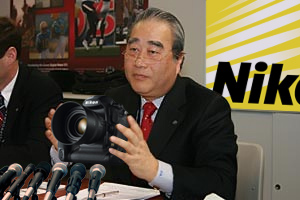 I don’t know what they told Adachi, but he became very pale and started sweating like crazy while he was on the phone with them. So it would have been a very strange coincidence if Laforet were to announce or confirm his switch to Nikon today. But anyway, we still have him and that’s what matters now.

Also noteworthy is a comment made by DarthDouche, which I think deserves to be posted here in full with commentary:

First I’ll be serious, then follow with profanity in order to be cool like the rest of you old fat cocksuckers. (FCW: Yes, that’s how we operate around here.)

I love Canon products…I’ve never owned Nikon (yet…haha…just joking…maybe in the future?? Nah, it’d be like cutting my dick off and making your Ashton’s wife choke it down!). However last year I purchased a small Sigma camera. Berate me if you must (like I give a fuck what you bunch of tampon sucking wimps think…). Quirks aside, its sensor is brilliant…and achieves color, sharpness, and low noise (within its limited resolution)….FAR THE FUCK BEYOND ANY BAYER FILTER’D SENSOR EVER WILL!! It’s a shame that they let a room full of monkeys design the rest of the camera’s innards. (FCW: Sounds like the situation at Canon Inc.’s DSLR product design department.)

Now on to my criticism of this blog posting. I am pleased to see this “future” Canon 200-400 lens. However, to fall all over yourself slamming Nikon for “copying” Canon…in a “blog” about how a 200-400 f/4 lens is “new”, no less??? I mean get the fuck over your dumbass self man!! Integrated extender or not…so what? (FCW: Well…um…)

Canon may know how to make (perhaps) better lenses than everyone else (overall anyway), and charge a fair price for them (as opposed to Nikon charging 20% more for the same or less quality…then painting them with black leaded paint so they look even more like turds)… (FCW: Well yeah, the older ones look kindof weird, but the new AF-S lenses look kinda cool with the golden stripe and all, ofcourse blatantly ripped off again from Canon (red stripe on L lenses))

…but Canon are damn sure too slow and unimaginative with “innovative” ideas! (FCW: That’s what I’ve been saying here man, haven’t you been paying attention? For the last 4 years this has indeed been the case.)

As a side note…I’ve read a review or two regarding the AF on the 1DMk4. If its AF sensors are so huge and “innovative”, why the fuck can’t they work well in low light?? You know, at least try to beat Nikon where they are good (at a supposed -2EV)?? Why not go for -2.5 EV, rather than make something that gets one-upped by the measly “old man’s camera” in low light, the 5DMk2? (FCW: You’re preaching to the choir my friend. Also I like how you call the 5D Mark II an “old man’s camera.” I really think there’s no better way to describe that camera. It’s just like how someone else recently said that it has an auto-fuck-us system. I think that very accurately describes the focus technology in the camera.)

I think the same supervising “engineers” in charge of ideas for AF sensors for the 1Dmk4, are in charge of deciding whatever cheap ass, plastic piece of Rebel xx camel dung to make. The same ones that decided $1100 wasn’t enough to pay for a real camera with a magnesium chassis, that has AF microadjustment. The same ones that couldn’t figure out they were about to be owned like a bitch in an alley by Nikon and their D7000. (FCW: They were caught with their fucking pants down. I warned them but they wouldn’t listen.)

The same ones that Rebel-ized, and cut the balls off the 60D, simply because they didn’t want to cut into 7D sales. For what? To saturate the market with lame ass entry level SLR’s that get matched or beaten by 4/3 and micro 4/3?? I guess they didn’t have the faith in their own 7D from the get-go, that the press did. (FCW: Amen brother!)

Then undercut the D7000 with the 7D, make it $50 less than the D7000…rather than hundreds more. Then hire some new thinkers to beat Nikon at their own game…before they make anything else new. (FCW: And fire the entire upper management for their incompetence.)

I read it somewhere, maybe here…is Nikon now the new Canon, and vice versa? (FCW: Yes that was here.)

I guess Canon needs to hire some celebrity like Nikon did, to hawk their products in lame ass tv ads. You know, somebody ELSE who likes tripping over wedding cakes…and who married a lady 40 years older than them, who still looks hot, at least in silhouette. (FCW: I actually proposed something like that a long time ago, but those bastards in Tokyo refuse to listen to me. Here’s some of what I had proposed:  “Even if this wasn’t a problem, there’s still the issue of why people should listen to some Japanese guy named Takahito Mizutani who likely got paid (or possibly threatened) to do the interview. I mean for Christ’s sake, couldn’t they find someone better? At Nikon they have Ashton Kutcher! The guy probably never actually uses a Nikon camera longer than 2 minutes a month, and that’s when he’s able to figure out how to turn it on. But when he tells people he’s using a Nikon DSLR, millions of people who know and like him listen. And that’s marketing. But at Canon Inc.? There they have the great Mr. Mizutani. Couldn’t they pay someone better to talk about the 1D3? How about Arnold Schwarzenegger? Nikon has Ashton Kutcher, why can’t we have Schwarzenegger? Can you imagine Arnold dressed like the T-800 on his Harley looking very serious, pulling out a 1D3 and going “I require excellent AF.” That clip would have moved some serious inventory.”)

They need to add more zeros to their camera names. The Rebel EOS TQis777000000000 IS, with image stabilimotion and global orgasm positioning…the Rebel Dreamliner Signature PQiS, with integrated mobile aps…It takes your pictures for you, while you spend your time doing important stuff like stalking chicks on facebook…with its integrated ap. (FCW: Interesting, we may have to look into that.)

And now for the cussing, because you know, I’m real mature and shit ya’ll. FUCK FUCKA FUCK YOUR MOTHER BLAH BLAH BLAH…in the ass blah blah all night long…say hello to your mom’s new backdoor neighbor! (FCW: Not bad, needs a little work. With some more practice I think you’ll do just fine.)

Don’t forget to sign the petition to Canon Inc. regarding the new 5D Mark III. In 48 hours only about 120 people have signed it and that’s fucking pathetic. I’m beginning to regret taking the time to have made that petition. I think I could have better used that time to shave my balls or something. At least my wife might have shown some more appreciation than the lot of you.

Well that’s it for today, I need to get back on the phone now with Japan to discuss some of our new wireless flash technology because I think their current implementation is half-assed at best.

5 thoughts on “We almost switched to Nikon ourselves”