Like a friend was quick to mention, Christmas came early this year at casa de Fake Chuck when I noticed that I was being followed on Twitter by none other than Nikon USA. In case you think that’s a typo, let me type it here again for you: I’m being followed on Twitter by Nikon USA. And no that’s not the fake Nikon USA, that’s real Nikon USA. You’re probably wondering how this happened, so let me explain it to you in more detail.

On November 23rd, 2009 Nikon USA appeared on the list of people I’m following on Twitter. At first I thought someone hacked my Twitter account and then followed @nikonusadotcom to frame me or something. But upon further investigation I concluded that apparently I must have somehow stumbled upon their profile on Twitter and then clicked the “Follow” button. Now, I’m sure some of you will be quick to mention that this is confirmation of the fact that I’m probably a crazy Nikon fanboy because I’m following Nikon USA and appear to be anti-Canon. But nothing could be further from the truth. The simple fact of the matter is that I like to keep an eye on the competition. That’s all. In the past I’ve also been very open about me using a D3 and D3x quite often while I’m out with the family. And in fact my D3s should arrive in time for Christmas. But this is just me err… evaluating… the competition and doing uh… competitive research. You have to know who you’re up against. On top of that I’m even doing all of this in my free time without getting paid for it, while spending my own money on the uh.. research samples. This just goes to show you the kind of dedication that I bring to my work at Canon USA.

Soon after Nikon USA somehow made itself into the list of people I’m following, I noticed the following tweet by them:

We’re reviewing the presentation of our products pages like this one http://bit.ly/1pul0P – send me a DM with your thoughts and ideas #nikon

Being the helpful and caring person that I am, I couldn’t help but offer them a suggestion:

@nikonusadotcom “We’re reviewing the presentation of our products pages – send me … your thoughts and ideas” – Suggestion: Remove them all

Yes I know what you’re thinking again: “Look he’s helping Nikon USA! He’s obviously a crazy Nikon fanboy!” And again, relax, nothing could be further from the truth. I believe we’re all operating in the same market and in a way we’re not only competitors but also colleagues who’re trying to do what’s best for the industry. And in that sense, I felt that they could really benefit from my suggestion. I’m not a webdesign expert, but in making that suggestion about improving the product pages on the Nikon USA website I was kinda going for the Zen approach to design. You know, less is more. So far it doesn’t look like they’ve followed my advice, but that might be due to internal bureaucracy. You know how these things go.

But I did notice soon after my suggestion that Nikon USA added me to their list of people they follow, which can only mean that they value my feedback and are genuinely interested in what I have to say.

It’s a sad day when you have to find out that the competition appears to be listening to you more actively than the company you’re working for. I don’t see anyone from Canon Inc. following me yet. Hell, I’m willing to bet my left nut that none of them even have a goddamn Twitter account. I’ve said it before, but our social media strategy is almost non existent. Canon Inc. apparently still think they’re doing business in the 80’s. At least I didn’t wait for them and started this blog, again in my free time, showing just how much I care about my work and about Canon products. I tried getting those fucks in Japan to start blogging about the company and about our products numerous times. I even told them to read Robert Scoble’s excellent book about corporate blogging. But every time I mention Naked Conversations to the Japanese they give me a funny look. Now they think I’m gay.

On the other hand you have Nikon who appears to understand social media a lot better. I’ve mentioned this many times before and the Lord of the Speedlights just rubbed it in again for us in true Nikon style, just to make absolutely sure we were noticing.

I really can’t understand Tokyo anymore. We’re fucking up in all possible ways. We’re out of touch with customers, our quality control is fucked, our recent products are fucked, our marketing strategies are fucked. It’s aaall fucked! 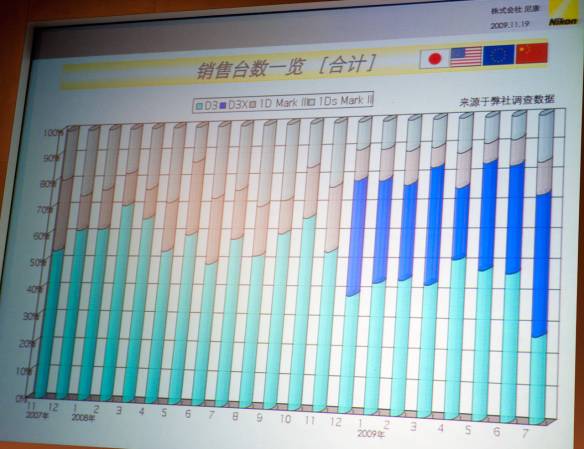 And the results can be seen in the image above. What you’re seeing there is worldwide fuckage. Quite scary, to be honest. That’s a shitload more D3 and D3x sales compared to 1D3 and 1Ds3. Let’s be honest: Does this surprise you? Because it sure as fuck doesn’t surprise me! And it also won’t surprise me at all when this same trend can be seen for other product models, especially when you consider the following graph which I mentioned in my previous post:

Maeda: "Competitions set our ass up the cocks!"

Call me pessimistic, but I don’t see this changing in the near future. Not with Nikon’s D3s receiving glowing reviews everywhere, especially when it comes to low light performance. We’re going to be oh-so-fucked if they update the D700 with the new sensor from the D3s early next year. In the mean time, Canon Inc. will keep cramming more megapixels onto future sensors while raping the shit out of image quality. Can you see a diffraction limited aperture of f/2.8 in the future? I know I can! It is going to be so awesome. Stop down from f/2.8 and experience mushy image heaven!! Hell, you’re going to have to shoot wide open constantly on most lenses if you expect to see any kind of detail in your images!

Despite my near-constant frustration with Canon, I held out for the mythical 5d Mark II – a camera that promised even better ISO, an even bigger sensor, an even fancier LCD and (you guessed it), the same crappy focusing system. At that point, Canon had me by the you-know-whats (I don’t actually have you-know-whats… it’s a euphemism, silly) – I had *thousands* invested in lenses (see below). So I shot my 5d Mark II for the entire 2009 wedding season…. on One-Shot…. using a high aperture… constantly cussing under my breath.

So, there you have it! Canon is a great system…. I will miss some of the lenses and the way the bodies feel in my hands (I still think Nikons are made for a man’s hands and mine don’t quite fit around the grip right).  But, at the end of the day, I am a stickler for focus and Canon just didn’t deliver.

And this is not an isolated incident, trust me. The end result was predictable: Switched to Nikon. I’ve written a lot here in the past about what can only be referred to as the legendary AF system of our 5D Mark II, but here’s a nice story to freshen up your minds. This user hasn’t yet switched to Nikon apparently, but sure as hell was already considering it. (Update: We’ve lost her)

The more I see these reports around the Internet and in my mailbox these days, the more I myself am thinking about switching to Nikon. Hell, I already am following Nikon USA on Twitter and already own Nikon gear, I might as well ask them for office space too!

39 thoughts on “I’m being followed by Nikon USA”