Updated on July 28, 2009: Updated some of the captions below the moonlanding pictures.

Man my previous post sure generated a lot of traffic. It looks like a lot of people were able to relate to many of the things I discussed there, especially Canon users. And that’s great, because I need the support of all of you to get those fucks in Japan to innovate. Where the fuck is my Eye Control Focus? Every time I send in my god forsaken feedback reports I keep asking for it and yet they seem to totally ignore it in Tokyo. This along with many other things people keep asking me year in and year out. The “good enough” mentality seems to win every time at Canon Inc. It’s the lazy-ass engineering I discussed in the previous post. Well there’s a time when “good enough” just doesn’t cut it anymore, and the issues we’re having with the 5D Mark II autofocus module proves this. It’s a goddamn tragedy that we have to put up with this crap in the technologically advanced time we live in right now. Back in the film days, you could get the EOS-1V with a working 45-point professional autofocus system for $2000. $2000!!!! Today, the EOS 5D Mark II costs almost $3000 and comes with a pathetic 9 point autofocus system that makes my cellphone camera look like a Hasselblad in comparison. And yes, the EOS-1V also had a built-in Eyepiece Shutter. Somehow during the transition from film to digital, the cameras got a lot more primitive at Canon Inc. Being the Technical Advisor at Canon USA, can you imagine in what kind of position I get into when people start pointing this out to me?

If you want another example of lazy-ass engineering at Canon Inc., just take the “‘On-demand’ Viewfinder Gridlines Projection System.” At Nikon it is simply an option in the menu to turn the gridlines inside the viewfinder on or off on demand. Even the fucking Nikon D200 which is now obsolete had this feature. At Canon Inc. you actually have to change the focusing screen inside the camera with one containing the gridlines etched onto them (which you have to buy). If you want to see the entire procedure for doing this, just look here. That’s some kickass 21st century technology, ya gotta admit. You look at that procedure and just marvel at its sheer brilliance. Whoever came up with that probably graduated at MIT at the age of 12. Compare that procedure to the Nikon procedure of a simple menu setting on the Nikon D200/D300/D700 which projects some kind of LCD grid inside the viewfinder. A world of difference. Canon has redefined the word “usability” with their “Eyepiece Closing ‘Mechanism’” and “‘On-demand’ Viewfinder Gridlines Projection System.” Imagine how much more productive this makes photographers using Canon DSLRs. And while changing the focusing screen, you had better pray to God that dust doesn’t end up on top of it, or, heaven forbid, on the exposed prism inside the camera, because then you’re really fucked.

Anyway, with your support I hope we can talk some sense into those morons in Japan. What surprised me though, was that even though the feedback to the previous post was overwhelmingly positive, the gestapo at the DPReview Canon forums went into action again and deleted an entire thread where Canon users were discussing my post. This is not the first time this has happened. Fortunately I was able to save 2 of the 3 pages of the discussion, and you can download a PDF file containing the discussion here: Deleted Thread at DPReview. As you’ll see, about 90% of people there were positive about my post, and yet it had to be deleted. Doesn’t that make you wonder about who exactly is in control over at DPReview? Here is one of the comments in that discussion, which you’ll find in the PDF, that I found interesting:

Should you have to jump all the way to the 1-series to get a high quality comprehensively-featured, no-excuses camera from the world’s larger SLR manufacturer? The 5DII costs more than any film-era 1-series EOS SLR while limping along with a derivative of the 7-point AF system developed for the EOS Elan 7/7E (itself, a derivation of the 5-point AF of the EOS-5/A2/A2E from 1992) and is marketed toward professionals, yet starting with the EOS-1N, those cameras had eyepiece shutters. Of course, all the 1-series cameras have them, so obviously we’re not talking about having to re-invent the wheel to implement the same system in a 5D-level body–the parts already exist. No, it’s just that, in true Canon style–as was the case with even the storied EOS-3, which shared quite a lot, mechanically and electronically, with the 1-series film SLRs–they have chosen to compromise functionality (along with viewfinder quality, build quality, autofocus, environmental sealing, user-configurability and features) for the protecting sales of the 1-series. $2700 should buy you a DSLR you don’t have to make excuses for in terms of its basic functioning: AF and metering. And I’m not willing to give Canon a free pass on the “value” of a full frame sensor this time around, when the 5DII sensor is so clearly a derivation of the existing 1DsIII sensor and they spent, essentially, nothing on AF improvements. It’s infuriating when Nikon and Pentax offer bodies with more comprehensive features and/or superior build quality to the 5DII for significantly less money.

Some excellent points in there.

In other news my Tech Tips for July went online a while ago. Very boring as usual, but perhaps there’s something there that might interest you. Nikon also released a fuckup notice for the D5000 last week. It seems that some D5000 bodies don’t turn on after a while due to some problem. At least they’re a lot quicker at Nikon to admit any issues and to offer to fix it. At Canon Inc. they would have first denied that the D5000 had any issues, and after a few months take a look at it anyway and then actually “fix” the same problem a couple of times in the course of 2 years. After that, they’d release a video interview with some unknown Japanese photographer making multiple claims that the D5000 does in fact turn on, mentioning how great that is, and that this is one of its most important features.

On a more positive note though, my marketing idea for hiring Arnold Schwarzenneger to promote our DSLRs has been very well received even at Canon. Since Nikon has “ashtonsdslr.com” we’re now in the process of registering the domain “thegovernatorsdslr.com” and have it redirect to our EOS website. We need a totally different approach to marketing when the 1D Mark 4 gets launched. I really hope that Vincent Laforet, peace be with him, will be able to look at the 1D4 and do something really spectacular again so we can seriously start kicking Nikon’s ass. Lord knows we need it.

Okay so you probably saw that this post had a strange title and that’s because I’ve been seeing all the Apollo 11 moonlanding crap all over the place and as I was getting sick and tired of that shit I noticed something strange when I looked at some of the pictures. As the Technical Advisor, or Camera Guru if you prefer, at Canon USA, you know that stupid shit like this is not going to go unnoticed by me. I didn’t become the Technical Advisor around here for nothing.  And instead of just showing you what I mean, I decided to do an online photography workshop instead. Workshops are so hot right now, everyone is doing their own, so I thought why not have one myself?

In this case the workshop is more about lighting. Lighting on the moon during the Apollo 11 mission. This is the kind of stuff the Lord of the Speedlights dreams of doing, but can’t, because he’ll probably lose all of his sponsors overnight. Me, I have Canon backing me so I don’t give a flying fuck. Since the astronauts on Apollo 11 didn’t bring any lights of their own, we really only have one light source on the moon: The Sun. So that makes our workshop a One Light workshop, not to be confused with Zack Arias’s One Light Workshop, which doesn’t come even close to what you are about to experience in a moment.

Okay so much for the intro, now let us start by looking at some of the pictures that were taken during the Apollo 11 mission and reverse engineer the light Strobist style:

This is a picture of the moon. It’s important to take note of the fact that the shadows are all pointing in the same direction, and that the shadow areas are pitch black.

Another picture taken by the astronauts shows the extremely dark shadows. Notice how the shadow side of the hills are totally dark. If you’d stand there you wouldn’t see shit in front of you.

Even more bullshit from the motherfuckers who call themselves astronauts. The astronaut is coming out of the moonlander at the shadow side, and yet there ‘s so much light! Now how the hell is that fucking possible? Simple: There had to be more light sources when that picture was taken (red arrows). If you look at the orange structure, clearly there’s light coming from above. Perhaps an Alien craft flying by was giving some assistance? Below is how that picture should have looked like with only the sun as the light source.

Even more horseshit from the overpaid nutcases at Nasa. Again, the astronaut is at the shadow side of the moonlander, and lit like a fucking christmas tree. I wonder how sunlight was able to reach the astronaut behind the moonlander. Below is again the simulated version of what that picture should have looked like. 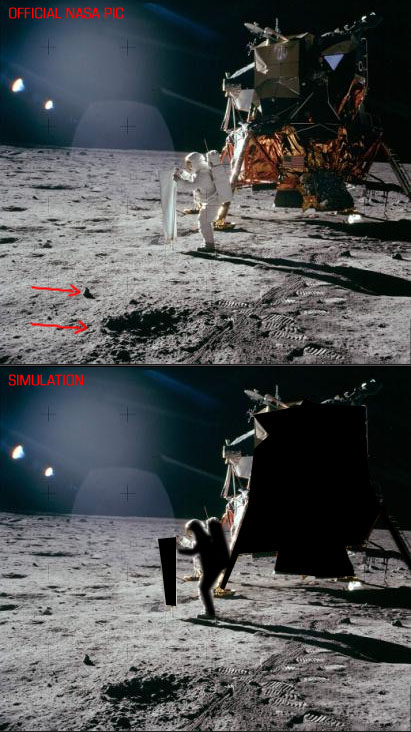 In this picture the shadows look believable, very dark and shadow side of the astronauts and flag are a lot darker, essentially black. But why does one of the astronauts have a much longer shadow? Also, is the surface of the moon gray or brown? Seems to me like the assholes as Nasa can’t decide.

The fucking astronaut is standing in the goddamn shadow of the fucking moonlander, how in God’s name is he visible, when the sun was supposed to be the only light source? Looks to me like those fucks at Nasa used a little fill light.

This picture is just awesome. If they decide to do some lighting workshops at Nasa, I’ll be the first to sign up. Hell, I don’t even care what it costs, I’ll take a second mortgage if I have to. If you can do this, you’ll never need to use a flash ever again. Compare this to the picture above with the 2 astronauts with much darker shadows. And the surface of the moon looks a lot more brown in the reflection. Hmmm… 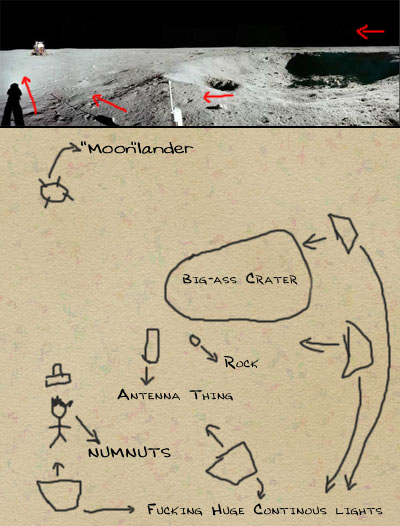 And this is truly magnificent. Forget Zack Arias, forget the Lord of the Speedlights, hell, forget McNally. Those guys are nothing compared to what Nasa achieved here using just one light source. It looks like the sunlight went in one direction, then actually made a turn and came back in the frame from a different direction. You would have to use String-theory to explain what’s going on in that picture. To keep it simple, I made a lighting diagram below the picture to show you how I think the lighting was set up in this case. Forgive me for spelling errors, I’m tired.

And that concludes this Apollo 11 One Light workshop. I hope you’ve learned something important from all of this and that this will make you a better photographer. For more background information, watch this.

60 thoughts on “The Apollo XI One Light Photography Workshop”