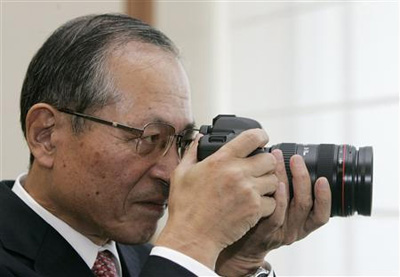 Canon Inc. President Tsuneji Uchida looks through the viewfinder of a 5D Mark II trying to take a picture of falling Canon market share numbers. I hope he had it configured in AI-Servo mode. I bet the 9 point AF really wasn't enough either.

The truth is, my old pal Uchida here probably needed a Nikon D700 in this case. Not only do you need the speed, but it’s also highly likely you’d want the falling numbers in focus in your pictures. Right? So how do you like the shutter lag on the 5D2, old pal? Really wonderful isn’t it? I bet the 9 point AF system with the single center crosstype point came in really handy too.

I started this morning very optimistic. I kissed my wife and daughter goodbye, came to the office, sat behind my desk and was bursting with energy. It was a beautiful day, I haven’t felt this healthy in weeks. And then I saw this article on Reuters where our good friend Uchida here was mentioning that the digital camera market might shrink in 2009. Well gee, I wonder why? Could it be because we’ve been releasing a load of crap this year and last year? The fucking 1D3 can’t focus, we’ve got major quality control problems as reported everywhere on the Internet, the 50D sucks and is getting mediocre reviews and it looks like not even major price drops are going to help, the G10 just got trashed on DPReview, the 5D2 which had the potential of really boosting sales got equipped with an AF system that is ancient to say the least, not to mention the same old mirror box and slow shutter mechanism. And now he’s saying the digital camera market might shrink?? WELL GEE, YA THINK??? What the fuck did you expect?

I’m not going to deny that the global economic crisis is going to influence our business at Canon, but at a time when we really need to have exceptionally good products to drive sales, we’re here releasing a load of crap on the market. We’re in a period right now when people are going to think twice as much, if not more, before they decide to spend their money. You’re going to have to really have a good product on your hands if you expect people to lay down the cash in this economic situation. And it looks like the market just doesn’t think we have those products at this time. And this is going to hurt us more than the economic crisis itself.

Is the economic crisis causing us to lose market share to Nikon and others?? Heck no. What is causing it are our own fucked up products, and the great products from competitors like Nikon. I’m sitting here reading the stories everywhere on the Internet about Canon users switching to Nikon every day and in all of the cases, the reasons were because the Nikon cameras just were better overall. For fuck’s sake, Nikon has a nice eye piece shutter for closing the viewfinder on their cameras. We have a goddamn eye piece cover that looks like something from the middle ages. That’s some state of the art engineering right there. Auto focus points and grids: Nikon – Super imposed, Canon – Etched into the focusing screen. Fuck’n A. That’s some kickass 21st century technology.

Now we may have the best sensors when image quality is concerned, but do you think that someone trying to spend his money wisely in this crisis is going to buy a 5D2 and limit himself to shooting slow action and landscapes, or would he buy a D700 which is a more general purpose camera and cheaper?

And with the Nikon D3x getting released next week, the shit is really going to hit the fan for us. The 5D2 is going to face some tough competition. The 1D4 is currently on the fast track, and if we fuck that one up as well, I fear for the worst.

I need a drink.

17 thoughts on “Digital Camera Market Shrink in 2009, and I feel fine”